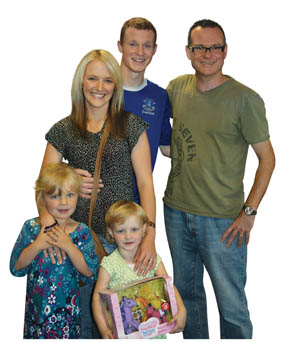 Lindsay and Mark with their daughters with John Kirky, founder of Christians Against Poverty

Lyndsay felt so trapped by financial worries that she tried to take her own life. A wife and mother of two small children, she saw no other way out of her problems. But thanks to the support of the charity Christians Against Poverty, Lyndsay’s family are now on their way to being debt free and with a new purpose to their lives. Christians Against Poverty is a national debt counselling charity, working through a network of 102 centres based in local churches. CAP offers hope and a solution to anyone in debt through its unique, in-depth service.

Their help doesn’t just last a few weeks either. They support their clients until they are debt free, even if it takes years. And it all starts with a phone call. Thousands of people across the UK have found help with their financial problems. People like Lyndsay and Mark. Their story is one of 12 told in the book ‘Journeys of Hope’ compiled by the charity to inspire others.

Lyndsay’s troubles were not all money based. She had suffered from post natal depression. She couldn’t talk to husband Mark about her feelings of isolation.

‘I just wanted all the problems to go away,’ she recalls.

‘I don’t think it’s ever one thing that drives someone to suicide, but a combination. For me, I couldn’t take the endless assault of my insecurities, money worries and fear. It was too much for one person to take and I wanted out.’

Mark was distraught by his wife’s suicide attempt.

‘Seeing her in hospital after the overdose, Mark says, ‘was one of the most horrific experiences of my life.’ He couldn’t reassure his wife that she was loved.‘She always questioned what I said, thought I was lying and would find it impossible to trust me.’

‘When we approached CAP for help, (Lyndsay’s aunt was a CAP client) it really was our last chance, as previous companies who had promised the same service hadn’t delivered.’

When Lyndsay got out of hospital, she contacted CAP to arrange a home visit. Lyndsay and Mark were nervous but were reassured and relieved to know that CAP would be helping them arrange to pay off their debts in manageable monthly payments.

With their finances now under control, Lyndsay was free to consider the other problems in her life. At a CAP client evening some months later, she made the decision to become a Christian. ‘I felt overwhelming joy and peace. It was like someone had reached into my brain and removed all the insecurities I felt and all the worry.’

Lyndsay’s new found faith had an immediate impact on Mark. ‘I couldn’t get over the change in her… it totally changed our relationship.’

But he wasn’t convinced following Jesus was the answer for him. Later, on a CAP organised holiday, Mark felt it was right for him to make the commitment too.

‘Becoming a Christian was the most life- transforming decision I have ever made,’ he says. ‘Not only has it brought me closer to Lyndsay, but I now have this incredible relationship with God … I am amazed at how God has saved us as a family.’

Mark sums up what being a Christian means for him, ‘being part of the most incredible family you could ever imagine, with God as the parent you always wanted.’

Journeys of Hope (£5.99) is available from CAP at www.capuk.org

To contact CAP call freephone 0800 328 0006 to book an appointment.
People not living near a CAP centre should still call the freephone number to find out what other assistance might be available locally.

Story and photograph by courtesy of Challenge Newsline