When Keith ‘Skipper’ Wint’s ambition changed from joining the army – because he ‘loved guns’ – to becoming a gangster, alarm bells rang! 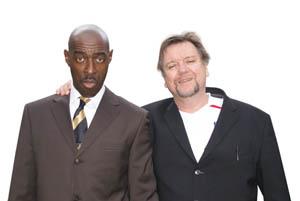 Keith was brought up in Leicester. His Christian mum forced him to church as a child but he soon found ways of hanging out with his mates instead.

It wasn’t long before Keith was getting into serious trouble. Influenced by the Rasta culture, he grew locks and smoked cannabis. Crime financed his new lifestyle. ‘I used to rob anybody,’ he admits, ‘and I was always fighting with my dad.’ After one robbery that left his partner in crime behind bars, Keith hitched a ride on a milk float heading for London.

‘I knew that London was where the proper action was.’

His ambition to become a gangster became a reality. Crime, drugs, and violence ruled his life. ‘I was scared of nobody,’ he says. ‘It got crazy when people started killing each other.’

Soon the UK wasn’t enough, so he went to Spain and got arrested while importing cocaine from Brazil in his shoes. He faced a nine-year sentence in a Spanish prison. He served over five years before being repatriated to the UK to complete his time in Wandsworth Prison.

Now his mum had been praying for him all these years, and kept praying for him and being there for him. She even turned up to support her son with a posse from her church when Keith was in court!

In time God answered those prayers. When Keith was released from jail, the gangster dream was beginning to lose its appeal. Keith’s drug habit had caused a heart blockage which left him unconscious in hospital.

This ‘wake-up call’ left him questioning his life.

He started to attend a multi-cultural church which had been recommended by a friend.

Keith was impressed by the folks he met there. ‘God is cool; he likes everybody!

‘I didn’t want to be a gangster anymore.’ When the pastor suggested Keith be baptised, he jumped at the chance to show everyone that he had become a follower of Jesus.

‘It’s not easy being a Christian,’ he admits. ‘There ain’t no perfect Christians but we are trying our best.

‘I don’t read the paper in the morning until I’ve read my Bible. Hardly anyone reads their Bible in public – I read mine on the Tube!’

Keith’s most pressing need was to find work which he did thanks to the help of Christian charity Pecan. Now he has two jobs! (www.pecan.org.uk).

Keith has been supported by Transformed, the south London based Christian fellowship for ex-offenders run by Pastor Frank Brookes.

You can watch Keith tell his story at www.tranformed.org.uk and find out about their meeting.

Keith Wint
Story and photograph by courtesy of Challenge Newsline